Common Types of Phishing Scams that You Face

Phishing scams have emerged as one of the most prevalent types of cyber-attacks. These scams are driven by social engineering and typically aim at tricking victims into providing their personal or company data to cybercriminals. Phishing remains one of the most frustrating threats that Internet users face. 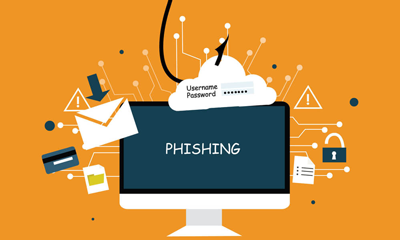 The scams involve cybercriminals sending messages purporting to be from legitimate companies. Often, such messages hoodwink recipients into opening dubious websites that are designed to capture their personal information. Here are the common types of phishing scams that enterprises and individuals face.

Arguably, this is one of the most prevalent types of phishing. It involves cybercriminals introducing some malware into emails or links that direct recipients to malicious websites. When victims open the links or attachments, malware will automatically get downloaded to their devices. Malware-based phishing is particularly prevalent among SMEs that don’t have the latest versions of software in place.

A significant number of phishing attacks start with malicious emails sent by cybercriminals to their targets. A hacker will, for instance, register fake domains that mimic legitimate websites before sending out hundreds of generic requests. Fake domains are often characterized by character substitution. For example, the letters “r” and “n” can be used alongside each other to create “rn” rather than “m.” Internet users who are not keen will end up on malicious websites that have been set up to steal their data.

Another conventional phishing attack, this scam targets specific organizations or individual users. Typically, spear phishers customize their emails to hoodwink victims into believing that they know the sender. To achieve this, phishers can impersonate employees or contractors who have previously worked for an organization. They do so to obtain financial data or other sensitive personal details from victims.

There has been a spate of spear-phishing attacks in recent years. In 2017, for instance, spear phishers posing as Quanta Computer, a renowned Taiwanese electronics manufacturer, tricked Facebook and Google into paying them over $200 million. This indicates how brazen spear phishers can get.

Just like spear-phishing, whaling attacks tend to be targeted. Often, cybercriminals target senior executives to steal company data. Unlike other phishing scams, whaling attacks leverage more potent and sophisticated techniques. Typical tricks that phishers use don’t come into play during whaling attacks. For instance, it’s harder to use malicious URLs or fake links to target senior staff at an organization.

To successfully execute whaling attacks, hackers often go for more subtle techniques. For instance, you will hear of scams involving the filing of false tax returns. Generally, hackers highly value tax forms because they contain all the useful information that the cybercriminals want to get hold of. This includes Social Security numbers, bank account details, names, and addresses.

Despite being one of the latest types of phishing scams, the prevalence of angler phishing is growing at a remarkable rate. This new attack vector leverages the popularity of social media to target victims and steal from them. Social media platforms offer cybercriminals an avenue for tricking Internet users. Fake URLs, posts, and cloned websites can easily be shared via social media. Alternatively, cybercriminals are using data that social media users share on their pages, to create targeted attacks.

In 2016, for instance, millions of Facebook users were bombarded with messages informing them that they had been mentioned in a post. Unbeknown to many of them at the time, this message had been initiated by hackers who used it to unleash a two-stage attack. Ultimately, many user accounts were hijacked and used to spread malware, besides stealing personal data from victims and their friends.

Have you ever received a legitimate email from someone you know, only to receive a similar email shortly after that? Well, you might have been a target of clone phishing without knowing it. This type of phishing scam involves the replication of recent messages that you’ve received. Often, the legitimate link is replaced with a malicious one with hackers stating that they are resending an updated version.

This is done to trick you into clicking a malicious link that leads you websites that collect your personal information. Reputable organizations hardly send a similar message twice. Instead of clicking a link sent to you, it’s advisable to visit the company’s website or contact them through their official phone address.

Each of the aforementioned types of phishing scams can result in significant losses. Besides, nothing hurts your organization’s reputation more than a phishing attack, thus the need to learn about the techniques that phishers use. Phishing scams often lead to devastating consequences. For more information about detecting and preventing phishing scams, visit the NuEduSEC website to learn from experts.